Members of Zonta are executives or professionals in a recognized business, institution, or profession who are willing to support the objectives of Zonta. Chartered in 1929, the Zonta Club of Ottawa, Canada has been a member of Zonta International for over 90 years.  ZC of Ottawa, Ontario Charter Certificate

Zonta International is a leading global service and advocacy organization with more than 28,000 members worldwide. Founded in 1919 and named for a Native American Sioux word that means “honest and trustworthy,” Zonta is made up of executives and professionals who work together to empower and assist women locally and internationally.  The Story of the Zonta Emblem

While Zonta is active in 62 countries, our clubs are not divided by country. Rather, our members work in geographic regions that transcend national and provincial borders. For example, Zonta Club of Ottawa Canada is part of Zonta District 2, that includes clubs in Montreal and many parts of New York State. This global structure enhances the truly international nature and scope of our mission and mandate.  https://www.zontadistrict2.org/

Zonta International is a leading global organization of professionals empowering women worldwide through service and advocacy.

Zonta International envisions a world in which women’s rights are recognized as human rights and every woman is able to achieve her full potential.

In such a world, women have access to all resources and are represented in decision-making positions on an equal basis with men.

In such a world, no woman lives in fear of violence.

You, can impact the lives of women & girls locally & globally. 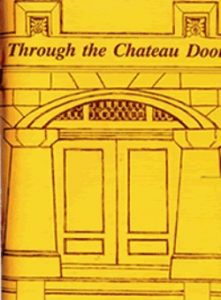 Through The Chateau Door: 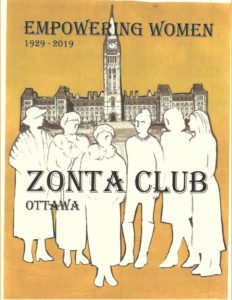 You are now part of a global network of professionals, like you, who are committed to equal rights and a life free of violence for all women and girls. Thank you for joining us!      https://www.zonta.org/

Zonta International follows democratic procedures and values the participation of its members in the decision-making process at all levels.

Zonta advocacy is action taken in “the public interest” or for “the greater good” with respect to empowering women and girls and promoting and protecting their human rights.

International
Zonta International advocates primarily through its General Consultative Status with ECOSOC at the United Nations (UN) and its Participatory Status at the Council of Europe (CoE). Zonta International has been affiliated with the UN since 1969 and has been represented in the CoE since 1983. Through these relationships, Zonta uses its strong voice to present our priorities and demand focused action when advocating for gender equality and women’s human rights worldwide.

Local
Zonta clubs monitor laws and policies and their impact on women, participate in hearings and public meetings with local politicians and administrators and host speakers and panels to raise awareness about issues affecting women at the local level.

Zonta International is nonpartisan and nonsectarian.

People often confuse being nonpartisan with being nonpolitical. Advocacy requires engaging with political systems and the individuals elected or appointed to serve in those systems. To be nonpartisan means that, when engaging in advocacy, you are not aligning that advocacy with one political party. This short video from the Zonta USA Caucus helps explain the difference.

Zonta Says NO to Violence Against Women

In 2012, Zonta International launched “Zonta Says NO to Violence Against Women,” a global campaign to raise awareness of and increase advocacy actions to end violence against women and girls around the world.

Every year, during the 16 Days of Activism against Gender Violence (25 November – 10 December), Zonta clubs and Zontians around the world take action and advocate to end gender-based violence in all its forms.

Zonta International not only advocates for women’s human rights and gender equality in all facets of life, we also partner with UN agencies like UNFPA, the U.S. Fund for UNICEF and UN Women to financially support projects to empower women and girls to understand their rights and realize their full potential.

It’s time to celebrate February 1st as the 91st anniversary of the chartering of our Club.

If we look back, we see a group of women who identified a need in the community and came up with a solution.  These pilot projects went on to be funded by government – municipal or provincial:
– the After Four project providing young children a safe place to go after school and    before a parent would be at home;
– Zonta House, a retirement residence for those single women who came to Ottawa to replace the men who had enlisted and who had limited means;
– Zonta Centre for Young Single Parents, a drop-in Program for high risk young parents, which was one of the five agencies that formed the Single Parent Network.

They assisted when Interval House and Nelson House ( second stage housing) were established; they worked with an Adult Literacy agency as volunteer tutors; they held meetings with various agencies to raise awareness of issues such as human trafficking; provided social interaction with immigrants who could not find work in their profession; and the list could go on.

Things were different in those earlier days – to be a Zontian one had to work full time, when one retired with less than five years, one’s membership was rescinded, there were two meetings a month which one was expected to attend, and communication was by “snail” mail – that wonderful invention called email was years in the future.
And, there was THAT FUNDRAISER – when an additional matinee was added to Peter Ustinov’s performance at the NAC with net net funds coming to the Club.

We have a wonderful opportunity now to get back to being the leader in the community.  If there is an advantage of the pandemic it is that virtual meetings can be held with attendees being anywhere in the world.  The event held with Dr. Koski was a good example with Zontians (and maybe others) from coast to coast and elsewhere attending.   Let’s get back to being community leaders and not show hesitancy, such as in setting  March 8th for an International Women’s Day event in case another organization has plans.

Zonta is a wonderful organization for forming lasting friendships.  Get out to beyond Ottawa’s borders and meet Zontians from the whole world.  It is so easy now to attend virtual District or International meetings; no longer does it involve travel or lodging costs.

Although there have been many “memorable” trips in the past and many a tale to tell!

This photo is of members who attended the 90th celebration on February 1st, 2020.  One of the last in-person meetings.  Let’s hope it’s not too much longer before we can have more of those.

Zonta is about empowering women – let’s make sure our contribution does just that.
Yours in Zonta
Lynda 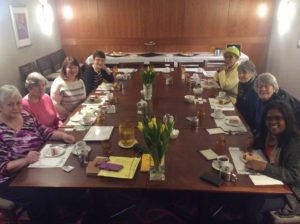 we look forward to another year of supporting women!