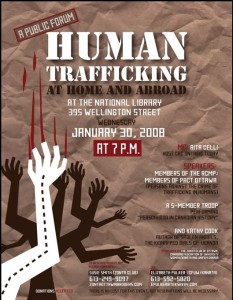 We began studying the issue in 2008 by meeting with the head of the RCMP’s humand trafficking desk.  Members were given an overview of trafficking in Canada.  After widely publicizing the event, the club joined UNIFEM and Kanata University Women’s Club to hold the first information session in human trafficking in the region. Although it was a cold night in January, 190 people attended. Speakers included members of the RCMP, Members of a small volunteer group called PACT-Canada and Kathy Cook, author of Stolen Angels: Kidnapped Girls of Uganda.  Then in March we held another meeting and this time we invited Jamie Heffernan , Coordinator of the Ottawa diversion programs (The John School).  It was at this meeting that we addressed the discussed the motivation for buying sex, and learn the nature and scope and harm of trafficking here in Ottawa.

The next task involved studying  the role that prostitution plays in human trafficking.  The club was asked to organized a round table on Parliament Hill in the fall of 2009. Again, a large number of government representatives attended. Although the club concluded its active involvement, it is now connected with PACT (Persons Against Crimes of Trafficking).  PACT has gone on to make a positive impact on building awareness about human trafficking in Ottawa, and they credit part of their success to the Zonta Club of Ottawa.