16 DAYS OF ACTIVISM AGAINST GENDER-BASED VIOLENCE

During the 16 Days of Activism, all Zonta clubs and districts are encouraged

to take part in the Zonta Says NO to Violence Against Women campaign.

INTERNATIONAL DAY FOR THE ELIMINATION OF VIOLENCE AGAINST WOMEN

In 1999, the United Nations General Assembly designated 25 November as the International Day for the Elimination of Violence against Women, and invited governments, international organizations and NGOs to organize activities designed to raise public awareness of the problem on that day.

Human Rights Day commemorates the day on which, in 1948, the United Nations General Assembly adopted the Universal Declaration of Human Rights.

Thank you to all, especially GRAN for inviting Members of Zonta Club of Ottawa to be there for the lighting of the Heritage Building in orange.

GRAN was out last night to see the Ottawa Heritage building lit in orange to mark the beginning of the UNite 16 Days of Action against Gender Based Violence. Thanks to Councillor Theresa Kavanaugh, Hydro Ottawa, and the City of Ottawa. #16DaysofActivism2020 #OrangeTheWorld, #EndViolenceAgainstWomen

Nov. 25th >  Beginning tonight, #OttCity’s Heritage Building will be illuminated in orange until Dec. 10 to mark the 16 Days of Activism against Gender-Based Violence. Help bring awareness and encourage people to call for the prevention and elimination of violence against women and girls.

Thank you to all City of Ottawa Councillors who voted on this!

16 Days of Activism against Gender-Based Violence

The UN System’s 16 Days of Activism against Gender-Based Violence activities, from 25 November to 10 December, will take place under our 2020 global theme: “Orange the World: Fund, Respond, Prevent, Collect!”

As the world retreated inside homes due to the lockdown measures introduced to curb the COVID-19 pandemic, reports showed an alarming increase in the already existing pandemic of violence against women.

“Accompanying the crisis has been a spike in domestic violence reporting, at exactly the time that services, including rule of law, health and shelters, are being diverted to address the pandemic,” stated the UN Secretary-General’s report, “Shared Responsibility, Global Solidarity: Responding to the socio-economic impacts of COVID-19“.

You can make a difference during the ongoing COVID-19 pandemic and protracted state of crisis it has generated across the world. You can support women and girl survivors of violence to stay safe and free of violence. Take action during this year’s 16 Days of Activism to End Gender-Based Violence. For more information about “Orange the World: Fund, Respond, Prevent, Collect!” and action ideas, see this year’s concept note.

The 16 Days of Activism against Gender-Based Violence is an annual international campaign that kicks off on 25 November, the International Day for the Elimination of Violence against Women, and runs until 10 December, Human Rights Day. It was started by activists at the inaugural Women’s Global Leadership Institute in 1991 and continues to be coordinated each year by the Center for Women’s Global Leadership. It is used as an organizing strategy by individuals and organizations around the world to call for the prevention and elimination of violence against women and girls.

In support of this civil society initiative, under the leadership of the UN Secretary-General, António Guterres, the United Nations Secretary-General’s UNiTE by 2030 to End Violence against Women campaign (UNiTE campaign) calls for global actions to increase awareness, galvanize advocacy efforts, and share knowledge and innovations.

Violence against women and girls is one of the most widespread, persistent and devastating human rights violations in our world today and is a threat to millions of girls and women online and offline. It affects women regardless of their age, background, or level of education. This violence takes many forms, including physical, sexual, or psychological violence, as well as economic abuse and exploitation.

25 November has been designed as the Orange Day by the UNiTE to End Violence against Women Campaign(link is external). The color orange symbolizes a brighter future, free of violence. It also serves as a means of demonstrating your solidarity in eliminating all forms of violence and it is therefore used as the color of the International Day for the Elimination of Violence against Women. As a show of solidarity, the UNESCO globe will be illuminated in orange.

On the occasion of the International Day for the Elimination of Violence against Women, UNESCO has organized an exhibition presenting the scope and depth of violence against women around the world, as well as initiatives that UNESCO undertakes in order to address this phenomenon. The exhibition will start on 23 November and will extend throughout the 16 Days of Activism.

The exhibition may be viewed here

UNESCO staff will participate in a group picture using umbrellas to say NO to violence against women, which will be used for advocacy and awareness raising. UNESCO Field Offices will also share pictures across all social media.

UNESCO invites everybody to post their photos on Facebook, Twitter, and Instagram accounts for the International Day for the Elimination of Violence against Women by including the hashtags #OrangeTheWorld #25Nov #IDEVAW and tagging UNESCO. Contributors may submit photos and/or videos saying “No to violence against women”, preferably featuring the symbolic umbrella. Remember to wear a touch of orange.

You can download our social media pack, which includes visuals and messages, including a frame for your pictures. Please share this information with your networks and help spread the word about this global issue.

Under an umbrella, we stand united to fight physical, verbal and emotional violence, both online and offline and SAY NO TO VIOLENCE AGAINST WOMEN.

@WomensEventNetwork  · Community Organization
National Day of Remembrance and Action on Violence Against Women. Virtual Vigil December at 6:00 p.m. It can be accessed at  www.facebook.com/womenseventnetwork
Although there will not be an in-person vigil this year, we welcome visitors to bring a real or handmade rose to the Women’s Monument located at Minto Park (102 Lewis St, Ottawa, ON K2P 0S7) throughout the day.
If possible, please take a photo of yourself placing your rose onto the monument and post it on social media with the #Dec6, #Dec62020, #16days, #ÉcolePolytechnique, #NotForgotten.
For those attending, please practice physical distancing.
Organized by the Ottawa Women’s Event Network

The 16 Days of Activism Against Gender-Based Violence is a global campaign, spearheaded by Rutgers University and coordinated in Canada by Women in International Security Canada (WIIS-Canada).

The Campaign was launched in 1991 and runs annually from November 25 (International Day for the Elimination of Violence Against Women) until December 10 (International Human Rights Day). Since its inception, it has become the most widely recognized and longest-running campaign for women’s rights in the world. Feminists in the 1990s achieved a truly monumental breakthrough when they secured the formal recognition of women’s rights as human rights, and of violence against women as a human rights violation. This work continues, in new ways, as gender-based violence continues unabated.

What Can I Do?

Three categories of things you can do to help end gender-based violence are:

What have we done?

Each year, our club supports and participates in initiatives and events around the city. Below is a recounting of our efforts each year:

For the 2018 edition, the Campaign worked under the theme “Ending Gender-Based Violence in the World of Work” with a particular focus on the adoption of legally-binding international standards to eliminate gender-based violence in the workplace.

Gender-based violence is a major obstacle to empowering women and girls, especially in the context of work environments. The Canadian feminist foreign policy can provide a positive impetus to advocate for the elimination of such obstacles and to sustain Canada’s efforts both at home and abroad.

The 2018 theme was Orange the World: #HearMeToo.

The 16 Days Canada Campaign has grown significantly since it began in 2014. The 2018 edition featured a record of 58 events and activities on the national calendar, including 15 initiatives with daily frequencies. The launch was marked on Monday November 26 by the illumination of the Heritage Building at Ottawa’s City Hall, an activity organized by the Grandmothers’ Advocacy Network (GRAN) and WIIS-Canada. A range of unique activities took place during the campaign, including a youth circle, a women safety workshop, a kickboxing class, art installations, a signature campaign and book clubs. Expert panels, moderated discussions, donation booths, whiteboard campaigns, roundtables, healthy love talks and lectures, vigils and candle light marches were also held in the program. Our partners reported more than 1,250 people attending activities in the provinces and territories of Alberta, British Columbia, Manitoba, New Brunswick, Ontario, Quebec and Yukon Territory.

Some of the activities also promoted the UNiTE (orange) Campaign led by the United Nations Entity for Gender Equality and the Empowerment of Women (UN Women), such as the events featuring Ms. Phumzile Mlambo-Ngcuka, Executive Director of UN Women and Under-Secretary-General of the United Nations, held at the University of Ottawa and in Parliament Hill, as well as an event at Ottawa’s City Hall that culminated with a municipal proclamation. Online activities like blog posts, online artworks, social media takeovers, stats and tips, awareness campaigns, a resource ‘zine, Facebook live events, webinars and website launches such as Sheltersafe.ca were also part of the Campaign. WIIS-Canada’s social media portals reached a total of 12,291 people on Facebook (number of people who saw contents by the page or about the page) and almost 89,200 impressions were measured on twitter (5,575 impressions per day). Partners reported significant engagements on their social media platforms, extending the impact of 16 days Canada even further.

On Monday, November 26, members of the organizing committee for Ottawa’s  16 Days of Activism met at City Hall where the Old Historic Building on Elgin Street turned Orange and Purple… The lighting of the building was organized by the Grandmothers Advocacy Network (GRAN) and the Women in International Security Canada (WIIS-CANADA).

Guest speaker was Diane Deans, an inspiring example of women making a difference in City Politics. Ms Deans is a member of Ottawa City Council, representing Gloucester-Southgate Ward in the city’s southeast, home to more than 49,500 residents.

The theme for Ottawa days will include Activism Against Gender Based Violence in the Workplace.  Be sure to join the many activities planned and most of all check in to social media. Building awareness is one of the main thrusts this year with messages appearing daily on Twitter, Facebook and Instagram.

What a group of days the Zonta Club of Ottawa experienced! Planning began months before. President Cindy O’Neil compiled over two dozen events being held in Ottawa for Zontians to attend.

Orange Scarves: Our November meeting, held on the 23rd November saw a beehive of activity.  Cindy O’Neil purchased a bolt of orange fleece and Lynda Pearson and Shirley Mack brought their cutting equipment.  At the end of the evening, we had a dozen orange scarves ready for distribution! 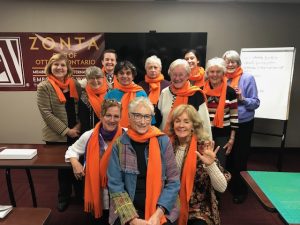 Leslie Lawson had purchased a dozen orange taper candles to be used at the opening ceremonies.  Leslie also presented a large 4’X6’ Zonta Club of Ottawa, Ontario, banner for us to use.  We also reviewed a calendar of Ottawa events from which members could choose those events that mean the most to them.

November 25-December 10: Prem Grainger posted a pertinent message each day on our Facebook page for individuals within and outside the club to share and spread the message.

Conclusion: the Zonta Club of Ottawa, Ontario is proud to have taken action during the 16 Days of Activism following the directive of Zonta International, “During the 16 Days of Activism, 25 November-10 December, all Zonta clubs and districts are encouraged to take part in the Zonta Says NO to Violence Against Women campaign and to take local, national and international actions to influence the making and implementation of laws, as well as changing gender-based attitudes and behaviors to end violence against women.”